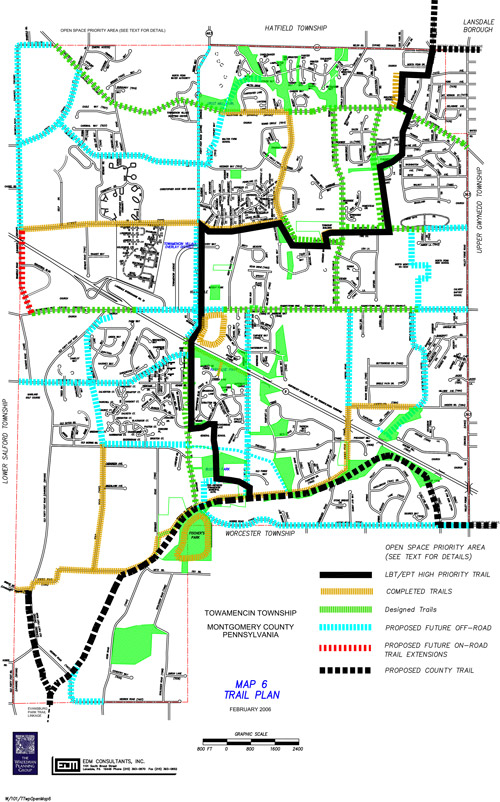 When Towamencin was first settled in the early 18th Century, there was an abundance of trees, a pristine creek, and fertile soil, which led to bountiful harvests for early settlers. Game and fish, and wild berries were plentiful, allowing for a variety of foods to be eaten. The air was clean and fresh. With the advancement of technology, and the influx of people, there were obvious changes made to the environment. The land became more densely populated, the car became the primary source of transportation, and as lives became busier, there was a loss of community and neighborhoods.
Within the last ten years, the Board of Supervisors have recognized this and have begun to undertake steps to reestablish a sense of place and community. Pedestrian-oriented development has been hailed as a return to "traditional communities, and the way it used to be." When looking for a house, people also look for what quality of life services are provided by the township to its residents. Trails, access to recreational facilities, and open space preservation are ranked as most important by homebuyers. Towamencin's residents are no exception. Five years ago, as a result of a survey conducted by the Township, a majority of the residents let Township officials know that if trails were built, they would be used for a variety of purposes: transportation, exercise and observation of restored environmental areas, a sunset, or a favorite view of the Township.

Towamencin responded and kicked off an effort to provide residents with what they wanted: a 33-mile comprehensive trail system that provided access to neighborhoods, parks, historical sites and stores, as well as providing residents a safe alternative to using their automobile to go everywhere in the Township.

Phase I of the trail system was constructed in the summer of 1998. This phase consisted of 8 miles of on-road trails along Allentown, Kriebel, Anders and Green Lane Roads. Phase II was constructed within Fischer's Park and Firehouse Park, and consists of 3 miles of off-road trails. The day the trails were completed, was the day they started to be used by residents for jogging, walking and bicycling. The trails, people quickly found out, took them along the Towamencin Creek, which let them observe the natural habitats of deer and rabbits. Their children had safer means to get to school and friends houses. The more people observed these amenities, the more they utilized the trail. And the trails, everyone observed, were used year-round.

Benefits of the Township-Wide Trail System

Over the last few years it seems we haven't been able to avoid a person saying, "All should give up their cars and return to the old forms of transportation, foot and horse. The environment will be saved, people lives made simpler, and infrastructure costs slashed!" Realistically, this is not going to happen, and most people realize this. But do you know what the benefits are to utilizing the trails?

Air pollution is decreased. If every person cut one trip a week in their car, say to the convenience store for a gallon of milk, it would decrease air pollution quite substantially within the region. One ten-minute trip generates one pound of NOx (nitrous oxide).

Money is saved on gas.

The destruction to the Ozone is decreased.

Air becomes cleaner, making it easier for those with respiratory problems to breathe.

There is not as much dirt generated, which means cleaning is not needed as frequently.

Educational Benefits:
In Towamencin, the trails don't just provide the opportunity for a nice walk, but also provide residents access to areas to observe nature and learn about environmental preservation.

Fischer's Park contains approximately 3 miles of trails just within its borders. The trails provide recreational areas, as well as access to wetlands, marshlands, riparian corridor restorations, a compost exposé, a butterfly garden, animal habitats, and a whole host of environs. The scenic beauty of the park, as well as the soothing sounds of the creek provides a sense of place to come to relax, walk, or just observe the natural beauty around you.

The on-road trails along Anders and Kriebel Road take you by restored riparian corridor’s that have matured. Animals such as deer, rabbit, gopher and a wide-variety of birds call these areas home.

The trails along, Quarry and Allentown Roads take you near the new municipal complex, the Morgan Log House—the township’s most significant historical structure—and the open spaces of Grist Mill Park. If you travel along Kriebel and Kulp Roads, it feels as if you have stepped back in time traveling near the farms and old farmhouses that exist in the panhandle of the township

Last summer, you probably observed the installation of the trail markers along the on-road trails. These directional arrows keep trail users on the trail, and warn drivers that there will be walkers, joggers and bikers on the road. The trail markers were made of a durable plastic and are a definitive feature of the trail system. Also installed last summer were interpretive signage along interesting trail destinations, such as the Morgan Log House.

All of the trails, existing and planned can not be made possible without the help of those who have participated in the Trail-Donor Program. Started in 1996, this program has provided the township with partial funding to provide the matches for the state grants used to engineer and construct the trail system.

Donors are still welcome! Phase III and IV of the trail system is to be designed and constructed within the next four years. Phase III will include on-road trails being installed on Allentown Road, Morris Road, Forty Foot Road, Sumneytown Pike, Troxel Road, Snyder Road, Weikel Road (between Sumneytown Pike and Allentown Road) and Keeler Road. This trail phase will be a combination of dedicated bike lanes and “Share the Road” signs. Phase IV will be off-road trails running along the PECO Energy Easement, from Sumneytown Pike to Morris Road, near the Charlestown Development.

The Township amended its ordinances, requiring developers to incorporate links to the trail system where possible. This will further continuity of the trail system and provide more access points for Township residents.

The Towamencin Township trail system is a dynamic project that will continue to expand for years to come. These trails provide a safe, alternative form of transportation that will enable residents to build healthier lives, as well as witness the building of a better Towamencin. Should you or your family decide to become a Trail-Donor, you will receive an engraved brick, which will be placed in a wall with other donors from your area, on the trail system. This wall will remain for all future generations to see--a standing monument to those who helped Build a Better Towamencin.